In this very first blog post, Mihkel Annus explains the origins of Plyke and how it's using the fundamental truths of the universe to make the world a better place.

Hi! I am Mihkel, a 20-year-old lad from Kristiine, Tallinn. Over the last couple of months, Plyke has grown from an early prototype stage to the brink of a salable product. However, nothing big is accomplished alone, thus in this short overview, I'd like to tell you, dear reader, more about where this entrepreneurial project started from. Furthermore, it is worth showing how this endeavor is using the fundamental truths of the universe to make the world a better place. This is the first chapter of Plyke.

Three years ago, as a high school student, I had to do a practical project. Having been without an idea for some time, I found an article about the Japanese bullet train Shinkansen, namely how it got its design from an unusual source. In particular, the front of the train was modeled after the beak of a kingfisher.

This got me interested in biomimicry, the emulation of biological organisms to solve the problems facing humanity. The possibilities seemed limitless! Life on Earth has existed for 3.5 billion years, during which it has had plenty of time to develop exceptionally effective processes, like the shape of a bird's beak to minimize resistance when it dives into the water to catch prey.

This resulted in me creating my own biomimicry project: a computer font with its letters, numbers, and symbols resembling the shape of a simple water droplet. Later, this concept of resembling nature's processes guided me from typography to building a never before seen bicycle bell.

Anyone who has ridden a bicycle at least once knows the role of a bicycle bell in getting around town. Navigating in traffic is actually one huge information exchange - the traffic lights show when we should start going, the tram bell announces an approaching rail vehicle, the noise caused by a motorcycle notifies from which direction an annoying driver is rushing out of. And, of course, the ring of a bicycle bell signals of an approaching commuter with a universal and distinct sound without one having to strain their vocal cords. More than a billion bicycle bells have been produced worldwide, and every second, more bicycle bells are produced than children are born.

Being in such widespread use, one would assume these devices are produced as efficiently as possible while being known for their excellent durability and design, right?

Unfortunately, the reality couldn't be more different. Almost every new bicycle or e-scooter comes with a typical Chinese-made bell, which rusts, breaks, and looks ugly. It consists of at least ten components and at least three different materials. Given their mining, production, assembly, and transport, the waste of energy and material is disproportionately high. Furthermore, producing the world's bicycle bells emits enough carbon dioxide to "drive" a gasoline car to the Moon and back - 200 times! In short, we aren't really looking out for the environment with a bell like this.

What's the vision for our novel bicycle bell? Plyke's goal is to replace the world's bicycle bells with our innovative design. To achieve this, we are applying a new so-called design philosophy, which is based - you guessed it - on modern applications of biomimicry. Thanks to its superior efficiency and design, we can make the device durable, environmentally friendly, and entirely recyclable. Together with my teammate Martin, I am working tirelessly to make Plyke the best bicycle bell on the planet. We’ll discuss the design philosophy, our team and more in further detail in our upcoming posts. 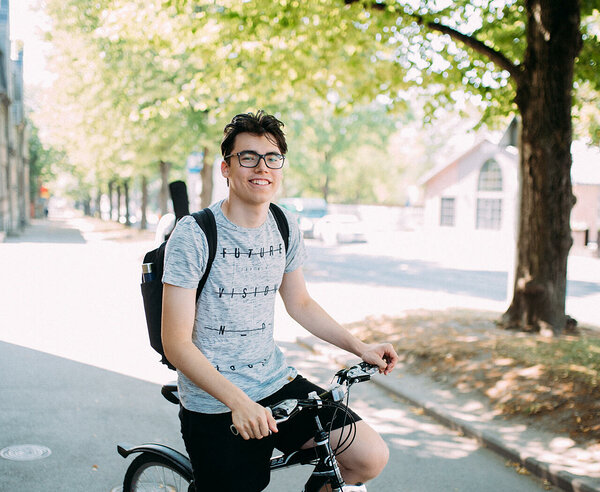